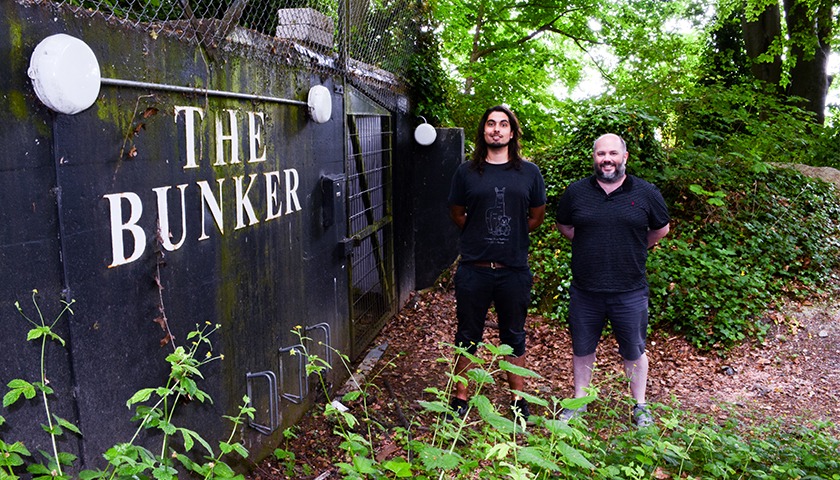 Creativity to return to The Bunker

Salisbury City Council has announced that Underground Studios CIC will be
the new custodians of The Harnham Bunker.

Today, (Tuesday 5th October) the community group received the keys and
can now begin their work to return The Bunker to use.

At present The Bunker is just a shell, so the group will spend the first few
weeks creating a space that is clean, fit for use, freshly
decorated, and bursting with equipment for young people to use.

The community group plan to launch an exciting program of workshops, sessions, and a creative youth club at The Bunker. This will provide predominantly young people with experiences and opportunities to learn and develop skills in music and digital media.

The Underground Studios is a collaboration between Alex Mobaraki, Andy Munns, and Naomi Payne who between them bring a huge amount of experience in these areas.

The Bunker will be renovated to create multi-use areas where many creative
activities can be pursued. These include a Radio and Podcasting Studio,
music practice space, a recording studio, a TV studio, and an IT and editing
suite.

There will be a chance for young people to learn about digital media in the
forms of Radio, Podcasting, TV, and Film as well as journalism and digital
media projects aimed at the wider community with a wider age range of
participants.

The team at Underground Studios also wishes to open its doors to other
partner organisations working with young people and other sections of the
community to develop a vibrant creative hub and maximise the space.

The Mayor of Salisbury, Cllr Caroline Corbin said, “The City Council is
delighted to support Underground Studios to bring the Bunker back into
community use for the benefit of the community. We encourage all those
interested to get in touch with the team and make the most of the
opportunities at the Bunker”.

Andy Munns, one of the directors of Underground Studios CIC said, “It is
hugely exciting to be entrusted with The Bunker. It’s an amazing space that
will allow us to welcome lots of young people, and some older ones too, into
the space and allow them to learn and develop new skills. It’s really important
to us that as many people, from as many backgrounds as possible, can
access the projects that we are running and The Bunker becomes well known
as a welcoming and safe place for people to come and try new things“.

Alex, a director of Underground Studios CIC said, “It feels like a lifetime ago
since the bunker’s doors were last open, so being able to finally say that the
bunker is back is fantastic. We’d like to use this opportunity to thank all the
young people, their families, local businesses, educational institutions and
council members; The support we’ve received has been absolutely amazing.
It’s been a long journey but we’re so happy to be returning home“.

Both Andy and Alex have joined the newly formed Youth Forum that has been
put together by Sarah Gregson, the City Council’s Communities Manager, and
will be working with her to connect their exciting work. There are
conversations already taking place with The City Council Communities Team,
Wiltshire Creative, and Wiltshire Council to increase provision through
collaboration to provide more exciting opportunities for young people in
Salisbury.

If you wish to partner with or support the work that will be happening in the
bunker, please contact the team via email
hello@theundergroundstudios.co.uk or visit the website, which is currently
under construction.